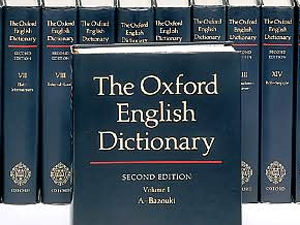 The Oxford English Dictionary (OED) is the guide to the meaning, history, pronunciation, and variant spellings of words, both present and past.

Need to find the earliest references to a word or phrase like "used up"? Need to understand how a word was defined in a particular time period? Then this source is for you!

The Johns Hopkins Guide to Literary Theory & Criticism contains contextual info on critics and theorists, critical schools and movements, and the critical and theoretical innovations of specific countries and historical periods.

Still trying to wrap your head around Derrida or Postcolonial Theory? Then this source is for you!

Need to look up a name, place, term, or event? The sources below contain many different kinds of encyclopedias and dictionaries and are excellent starting points.

Trying to identify appropriate reference sources and tools to consult? These guides are useful when planning how to approach a research topic.