Oklahoma Women in the Dust Bowl History Project
(Oklahoma State University Library)
This collection includes 46 interviews with women who lived through the Dust Bowl, primarily in the seven western-most counties of Oklahoma where the Dust Bowl hit hardest. These women discuss a wide range of topics, including the WPA, President Roosevelt, domestic life during the Dirty Thirties, rabbit drives, and Saturday evenings in town.

Studs Terkel: Recordings from Hard Times  Terkel interviewed hundreds of people across the United States for his book on the Great Depression of the 1930s. The interviews that he selected to be  broadcast in eleven parts on the Studs Terkel Program on WFMT radio (Chicago, IL) are included in this online collection.

ProQuest Historical Newspapers - searches the Atlanta Constitution, the New York Times, the Washington Post, and three African American newspapers: the Chicago Defender, New Amsterdam News, and the Norfolk Journal and Guide. Users can limit a search to a specific date or  date range under "Search Options."

Vogue Archive - Full contents of Vogue magazine (US edition) in full color page image, from 1892 to the present. 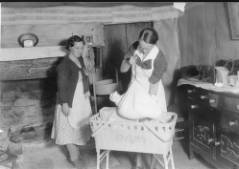