A History of the Detection, Conviction, Life and Designs of John A. Murel, The Great Western Land Pirate
Augustus Q. Walton
Published at Athens, Tennessee in 1835 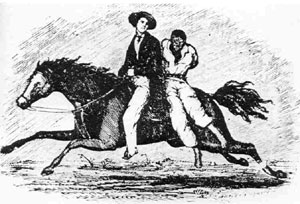 There is a tradition that Island 37 was one of the principal abiding places of the once celebrated 'Murel's Gang.' This was a colossal combination of robbers, horse-thieves, negro-stealers, and counterfeiters, engaged in business along the river some fifty or sixty years ago. While our journey across the country towards St. Louis was in progress we had had no end of Jesse James and his stirring history; for he had just been assassinated by an agent of the Governor of Missouri, and was in consequence occupying a good deal of space in the newspapers. Cheap histories of him were for sale by train boys. According to these, he was the most marvelous creature of his kind that had ever existed. It was a mistake. Murel was his equal in boldness; in pluck; in rapacity; in cruelty, brutality, heartlessness, treachery, and in general and comprehensive vileness and shamelessness; and very much his superior in some larger aspects. James was a retail rascal; Murel, wholesale. James's modest genius dreamed of no loftier flight than the planning of raids upon cars, coaches, and country banks; Murel projected negro insurrections and the capture of New Orleans; and furthermore, on occasion, this Murel could go into a pulpit and edify the congregation.

So wrote Mark Twain in his 1883 memoir, Life on the Mississippi, of a then-notorious but now-forgotten figure of the American frontier, John Andrews Murrell. Born in Virginia in 1806, Murrell was raised on a farm in Williamson County along with seven siblings. All three of Murrell’s brothers engaged in criminal activities of one sort or another, including horse stealing, grand larceny theft, and counterfeiting. The youngest brother, Jeffrey, was said to have operated a brothel before he turned 20.
Murrell was already a convicted horse thief in his teenage years. Following release from a six-year prison term in 1829, he continued a life of crime, leading a large gang of thieves and robbers—they called themselves the “Mystic Clan”—who operated chiefly along the Natchez Trace and the Mississippi River. Although on his deathbed he disavowed committing any murders, Murrell was reputed to have robbed and then killed around 400 victims. He was known in the Old Southwest as The Great Western Land Pirate. In 1834 he was arrested, indicted, and convicted on charges of slave stealing and he served a ten-year sentence at hard labor at the Tennessee State Penitentiary in Nashville. He died of tuberculosis at the age of 38 in 1844, nine months after his release, and was buried at Smyrna in the churchyard of the Smyrna First United Methodist Church Cemetery. Souvenir hunters dug up his corpse and removed parts of his body. Some historical sources tell us his head was pickled in jar and made the rounds of county fairs, where it could be viewed for “ten cents a peep.” The Tennessee State Museum has one of his thumbs, or rather what’s left of it.

In 1835, six months after his incarceration at Nashville, Murrell’s life and crimes were recounted in a pamphlet put forward by an unknown printer or publisher from, most likely, a town in west Tennessee. Subsequently, the pamphlet was republished at Athens, Tennessee and in numerous editions at Louisville, Cincinnati, Philadelphia, and New York City. Versions of the 1835 text continued to appear until at least 1851 (and possibly later) with additional material, including accounts of the crimes and executions of Murrell’s associates. Of the author, Augustus Q. Walton, we can find no information, but contemporaries believed Walton was a nom de plume for Virgil Stewart, who posed as a Mystic Clan recruit and who facilitated Murrell’s arrest. It should be noted that several editions issued outside Tennessee include the name H.R. Howard on their title pages, who’s identified as the “compiler” of the History’s contents.

Little is known of Virgil Stewart, but he seems to have been a resourceful and consummate opportunist. If A History of the Detection, Conviction, Life and Designs of John A. Murel comprised something of a bestseller, it was also an exaggerated, doubtful, and sensational account of Murrell’s career, describing various crimes and depicting a conspiracy involving hundreds of criminals extending from Maryland to Louisiana, all united behind a “master spirit” of vice and villainy. But it was Stewart’s account of Murrell’s lurid plan to provoke a slave rebellion that probably boosted sales. This was intentionally emphasized on the book’s title page through the eye-catching shift in the size and style of type for the words “Negro Rebellion.” The account struck a nerve in the South. Nat Turner’s uprising in Southampton County, Virginia, which occurred in 1831, was still a recent event in 1835. In parts of west Tennessee and Mississippi, where the enslaved population vastly outnumbered whites, Stewart’s pamphlet triggered fears of a similar insurrection. Indeed, Stewart’s pamphlet provoked efforts to extract information from slaves through torture. It also resulted in a number of extrajudicial reprisals directed at gamblers, often regarded as drifters with unsavory reputations and therefore possible Murrell co-conspirators. At Vicksburg, panicked citizens convened a kangaroo court that quickly led to the hanging of five gamblers.

Historical sources suggest Virgil Stewart made a fortune from his pamphlet. Some contemporaries even suggested he should run for Congress. But at Murrell’s death in 1844, Stewart’s claims and account were already regarded with skepticism. As a contemporary wrote in 1860, Stewart “is now known to be an imposter. The whole story was a fabrication. Murrell was simply a thief and counterfeiter, and Stuart [sic] was his subordinate, who, having quarreled with him, devised this plan to avenge and enrich himself. The whole ‘plot,’ and its tragical consequences, may now be regarded as one of the most extraordinary and lamentable hallucinations of our times.”

Note: Much of the factual information presented here is conveyed in the article by James Lal Penick, “John A. Murrell: A Legend of the Old Southwest, Tennessee Historical Quarterly (48): 174-183.

Record in the Library Catalog