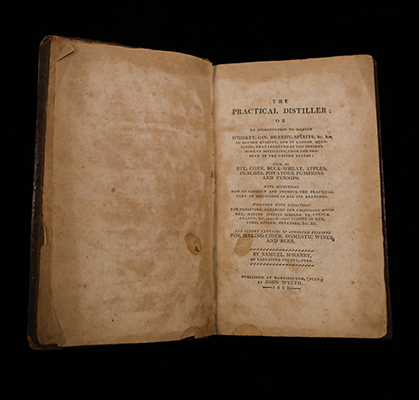 Prior to the American Revolution, the most common drinks in the Colonies were cider, beer, and rum. Farmers often set aside a plot of land for apple trees and much of the harvest was put through a cider mill, with the juice fermenting to hard cider. Beer was brewed at the tavern or in the home, and it was consumed by adults as well as children. These drinks were considered safe and even healthful at a time when water might contain harmful bacteria and other impurities.

Rum was a strong drink and chiefly consumed for pleasure. Most colonial rum was distilled in New York, Boston, and Providence from molasses imported from the British West Indies. Accordingly, the colonial rum industry was part of the northern Atlantic “triangular” trade route: British ships brought goods to western Africa and bartered these for slaves, took the slaves across the ocean to work on West Indies sugar plantations, and from there the ships brought molasses to the Colonies, where it was distilled into rum and consumed but also exported to England.

Following the Revolution, the popularity of rum declined in the former colonies due to two factors. First, the British government prevented molasses from entering the Colonies during the Revolution and, following the Revolution, imposed export restriction on the West Indies’ sugar and molasses. Second, Americans began developing distilled spirits from grains grown on American soil—chiefly, corn and rye but also wheat and barley. If we can trust Samuel McHarry’s opinions in The Practical Distiller, the early whiskey made in the United States was neither very good nor consistent from one batch to the next.

McHarry’s Practical Distiller, or, An Introduction to Making Whiskey, Gin, Brandy, Spirits, &c. &c. was printed and published in 1809 at Harrisburg, Pennsylvania (the title page imprint bears the misspelling, “Harrisburgh”). In his Preface, McHarry tells us that his work is the result of four years of constant study and experiment, and that his labors led to a “system” achieving a “degree of perfection” in the craft of distilling.

McHarry also suggests that his is the first American book on distilling to produce “ardent spirits.” He writes, “I thought there must be books containing instructions, but to my surprise, after a diligent search of all the book-stores and catalogues in Pennsylvania, I found there was no American work extant, treating on this science.” But McHarry’s book was preceded by another on the subject, The American Distiller, or, The Theory and Practice of Distilling According to the Latest Discoveries and Improvements, written by Michael Krafft and printed and published at Philadelphia in 1804. And a year after McHarry put forward The Practical Distiller, there appeared A New Plan for Distilling, With Greater Facility than Has Ever Been Heretofore Practised [sic] in Any Country , written by Robert Gillespie and printed and published at Baltimore in 1810.

A key reason why Walker Library acquired a copy of The Practical Distiller for our Distilling, Fermenting, and Brewing Collection is McHarry’s account—perhaps the first printed account--of what is now known as the “Lincoln County Process.” The process involves filtering the whiskey through maple (preferably sugar maple) charcoal before it goes to the cask for aging. This removes impurities and is said to impart a smooth flavor. Here is McHarry’s description of the process:

This process ought to be attended to by every distiller, and with all whiskey, and if carefully done, would raise the character, and add to the wholesomeness of domestic spirits. It may be done by clarifying the singlings [i. e., the “crude” or initial distillate] as it runs from the still—let the funnel be a little broader than usual, cover it with two or more layers of flannel, on which place a quantity of finely beaten maple charcoal, thro' which let the singlings filter into your usual receiving cask.

Clearly, the whiskey-making techniques McHarry conveyed in The Practical Distiller were influential and some distillers regarded him as an authority. In Hall’s Distiller of 1813, for example, Harrison Hall repeatedly endorsed McHarry’s approach to distillation and reprinted his recipes. But as noteworthy as The Practical Distiller’s contents are, there is nothing noteworthy about the book’s material features. These are more or less typical of provincial book production in the early republic. The printer, John Wyeth, is a notable figure in American church music and a publisher of hymnals using shaped notes. He printed McHarry’s volume in a small quarto format on cheap paper—perhaps the best paper he could find. There is little typographic embellishment. The book is divided into short sections rather than chapters, with the divisions signaled by capitalized heads and a short length of rule. Type slightly larger than the matter marks the first word of the sections, but not in every instance, suggesting that Wyeth had more than one compositor set the book. And so, but for the contents, The Practical Distiller is an unremarkable book.