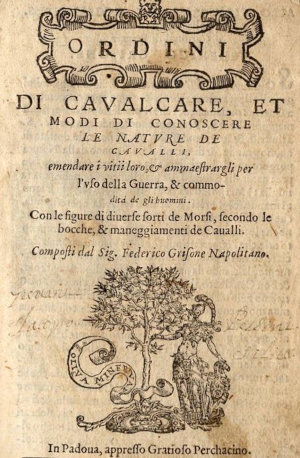 It takes only a short leap of imagination to appreciate the importance of horses in pre-industrial Europe. Travel, transport, agriculture, warfare, and numerous other aspects of life were closely bound to the horse. Like the steam or internal combustion engine, the horse was fundamentally a source of power and energy, and these were harnessed to human needs.

As important as horses were, it is surprising that, prior to the mid-sixteenth century, the only widely available, comprehensive instructional literature on training, caring for, grooming, and riding a horse was written in the classical age by the Athenian general and philosopher Xenophon (ca. 430–354 BCE). His two treatises are On Horsemanship (Peri Hippikēs) and a work on the military use of horses, The Cavalry Commander (Hipparchikos). There were other works on horses, but they centered on farriery—the shoeing of horses--and the treatment of diseases and other matters of equine health. They paid almost no attention to riding.

Consequently, it was something of a momentous cultural event when Federico Grisone published Gli Ordini di Cavalcare—The Rules for Riding—in 1550. Grisone was a nobleman of Naples who founded a riding academy there in 1532. In Ordini, he aimed to detail and codify the “correct” and “proper” methods of riding a horse. These involved a unity of horse and rider as well as formal and precise movements--movements that presaged modern dressage.

As one of his contemporaries suggests, Grisone’s notion of horsemanship was performative, for the rider would seek to impress an audience through correct technique: "From the first it seems that every horse obeys his signal, such that those who watch are amazed.” And as Grisone certainly understood, the performance could be consequential, for riders who performed well, “correctly” riding and managing the horse, upheld or enhanced their social status, earned the favor or admiration of the powerful, and projected dignity and accomplishment. Riding well was an attribute of L'uomo del Rinascimento, the multi-talented, polymathic “Renaissance man”—the ideal figure who excelled as scholar, poet, statesman, soldier, and philosopher.

Initially published in a quarto format at Naples in 1550, Grisone’s work was immediately popular and quickly became an international bestseller. By 1623 the text had been published in at least 21 Italian editions and appeared in at least 28 editions comprising French, German, Spanish, and English translations. Moreover, an untold number of manuscript copies circulated (including, possibly, in Portugeuse).

Our copy—the oldest book held by Walker Library—was published at Padua in 1559 and is likely the ninth or tenth Italian edition. The printer, Graciaso Perchacino, produced the text in a small octavo format. Typical of printers and publishers of the time, Perchacino placed a distinctive “device”—an iconographic trademark—on the title page. He used several different designs for his books, but the 1559 Ordini device depicts Minverva, the Roman goddess associated with wisdom and knowledge. The motto “Oliva Minerva” recalls her creation of the olive tree. She is portrayed holding a woman’s severed head with snakes writhing from her scalp, suggesting the mythological story of Perseus decapitating Medusa.

In layout, Perchacino followed the 1550 first edition, maintaining Grisone’s original division of the text into four “books” or chapters, and an appendix containing a profusion of woodcuts illustrating various kinds of bits. Overall, the typesetting is fairly conventional for the time and place. The main text or “matter” is set in an italic font, which was often used for small-format books in sixteenth-century Italy. The first letter of the first word in each chapter is set with a pictorial capital letter or “initial,” as textual scholars call them. Nested within nine lines of text, the initials appear slightly too large for the page, suggesting they were in Perchacino’s regular stock of type and not specifically engraved for Grisone’s work.

We might wonder if Perchacino secured Grisone’s permission to print and publish the 1559 Ordini. But the answer is an unqualified no. At the time, Italy was not a politically unified nation with a system of national laws. If he was answerable to any legal authorities in publishing Grisone’s work, Perchacino would only be answerable to authorities in Padua, but Grisone’s subject matter could hardly challenge the city’s secular and spiritual powers.